I woke up at 6, from the non continuous sleep that I had last night. I got out of the cabin to stretch my body. I slept on one side because if slept on other side, there were good chances that I am gonna fall.

After one and a half hour, train reached the station, there were two girls in next cabin who were also doing backpacking, I talked to them while boarding on train. They came out of cabin and more we had more chat. I asked them about place they were going to stay, and they said hostel.

So we came out of Central Station and three of us tagged along together to find hostel. My phone was almost out of battery so I was following them. After a while we couldn’t find the hostel and one of the girl was annoyed because she was hungry and wanted to have breakfast. I decided that it was time to part away. I wished them good luck with their journey and moved on to find something on my own.

So why I didn’t book anything before coming to Warsaw? There is one thing I’ve learned from long distance running, you find your boundaries and then stretch them, you figure out you can run 5K, you go for 7K next time. That’s what I wanted to do. I knew I can book an apartment from AirBnB at the comfort of my house but that would mean I lack another experience.

I went to costa coffee and got almost a jug of coffee and a piece of cake which by the way was the sweetest thing I’ve ever ate. I couldn’t finish half of it. I searched for hostel on google and went for the first result. It was pretty shady and kinda reminded of hostel movie. I said, ok I am gonna stay here.

Hall way of the hostel

Stairs of the hostel 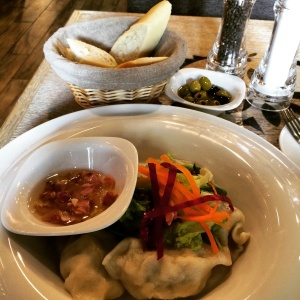 After checking in hostel, I took another nap and let my phone charge. After a while both me and my phone were charged a bit so I decided to head outside.

Since I let myself break out of my comfort zone again by staying in this shady hostel, it was time to treat my self. I went to a cafe close to Hostel called CUD MIÓD and asked the waitress about the Polish food. She said dumplings and I ordered dumpling with meat. They were really delicious! 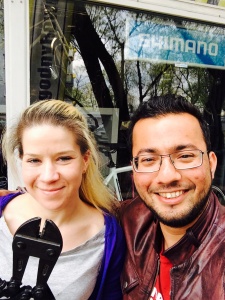 Then I decided to rent bike, the lady at Hostel told me about a shop. After walking in city for sometime, I ended up there and asked for bike rental options. There was a girl over there and we started talking. I told her how I biked in other three cities. The bike I chose to rent, there was a lock on that bike and she couldn’t find the key so she cut the lock with huge cutter.

Here is a picture of us, I asked her to keep the cutter in picture to make it look more badass 😀

Once I had the bike, I search on google and decided to see Łazienki Palace and Park. I cycled there but weather was so grey and dull I couldn’t enjoy the view. I walked in park and took some pictures. 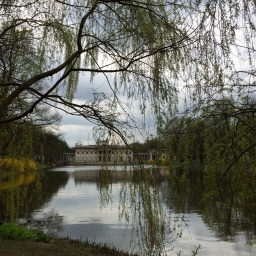 Honestly, I was kinda bored so I decided to get back to city center. Warsaw is not the best place for cycling. It took me 40 minutes to figure out how to go on the other side without breaking law too much.

To tell you the truth, the moment I came out of station in the morning, I knew this city was not the place for me, high-rise buildings, traffic, busy people with coffee mugs in their hands and headphone in their ears.

I came to Starbucks to get some coffee and started writing this post. After spending two hours there, I decided to go out again and visit Presidential Palace.

Again, I didn’t really find it very appealing so I decided to go back and on the way, I ate McDonald’s. On the way back, it was dark already so I took a picture of Palace of Culture and Science in lights. Here is how it looks like

At this moment, I felt Warsaw failed to impress me, I told myself, let’s see if something happens tomorrow that makes me like this city.