I didn’t slept well last night. When German guys came back at 1 AM, we started making comments about the beds in hostel and how we were in similar situation as of Syrian refugees.

Anyway, I woke up early in the morning and I knew I wanted to go for run. So I put on my running shirt and went for a 2 km run.

After that, I came back to hostel, had breakfast and talked with fellow backpackers around various topics and became friend with a  guy from Cyprus. After long chit chat, me and my new friend Andreas from Cyprus decided to go out for a walk. We went to several places, some old and most of them new. I took several pictures and a few timelapse. Some of the pictures are,

After that, we came across a park and decided to take selfie, following is a selfie and me in Usain bolt style 🙂 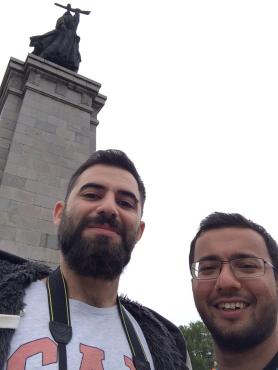 Then we decided to grab something to eat, we roamed around but couldn’t find anything proper, then I remember from day before yesterday another restaurant. It was called Cactus, funny name, eh? We went there and we decided to sit outside as it was nice and warm. We got the menu and I ordered Golash as starters and Lamb shank as main course. Andreas ordered cream of vegetable soup and roasted duck. 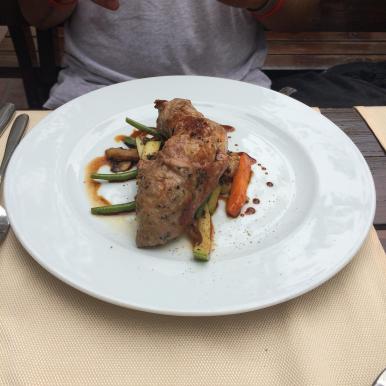 Golash straight out of Pot

It was the best Golash I ever had, even better than what I had in Budapest. After eating that, it was time to go back as it was 2 already and I had a bus to catch. We walked back and I withdrew some money from ATM and went back to hostel. I packed my bag and had a huge good-bye hug with Andreas. I asked the reception lady to call cab, which arrived within minutes and took me to station for less than two euros 🙂

I bought the bus ticket and station and sat on station and played some music. After a while, buses came and everyone boarded and bus started the journey. The seat where I was sitting be window was foggy from outside and blocked the view for pictures. There was a group of friends sitting on the seat beside and behind me. I asked one girl if she can record video of hills outside for me from her side. She said yes and that’s how recording and conversation started. We started talking about different things like work and travel.

After sometime, we came across border control. It was the toughest border control I’ve seen. The guy at passport control took his time to figure out what I was doing here. And then there were other steps to figure out further. At this point, I was very nervous. After all the verification, bus stopped st a station for 10 minutes for refreshment and toilet break. View at that place was amazing, I roamed around the place and took pics 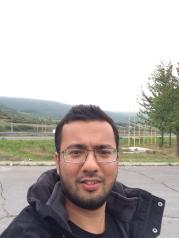 After that, buses started again and view became more awesome. I couldn’t take pictures but trust me on this, even after that tough passport control, I’d say it’s worth a visit.

After sometime bus, stopped at station and more people came in. There was a girl who now sat next to me, and after sometime I started talking to her. She was a biology student and we mostly talked about studies. She had an exam tomorrow and she also showed me the project she made.

After another 45 minutes or so, I reached Niš bus station. When I got off at station, I got even worried, because I had no idea what bus to take and from where. I asked a couple of people and they told me to go to city center and take bus from there.

I went to a currency exchange and got change in Serbian dinar. Then I came out and decided to call my host. She suggested I take taxi and told me she was also in taxi and can send me the same taxi at the place where I was at the moment. I didn’t even know the street name, so I went back to the currency exchange and asked the lady there to talk to her and explain the place and she did.

While we waited, we talked a bit about travel and situation of the neighborhood. She was very friendly and helpful.

After the taxi came, she even confirmed everything with the driver. Taxi driver was also a cool person, he gave I formation about places that were on the way. Then he dropped me at the place what he thought was right. I looked here and there and couldn’t find house. Following was the place where I was standing and thinking what the hell am I doing? 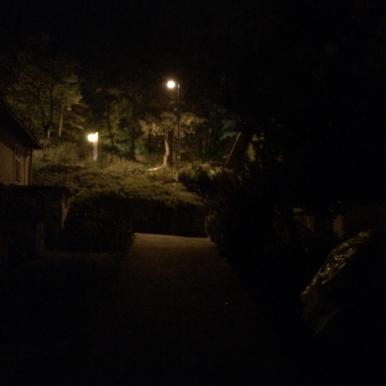 Then there was this lady waking and I asked her about address, she asked another lady and after discussion of 5 minutes, the first woman said, ok let’s find the place. She walked with me and asked people for the direction and then we found the house. She was 45 plus old with a great sense of humor. I can easily say that people of Balkans are very friendly. There was this old kind Serbia man was waiting for me there, he gave me information in Serbian most of which I understood. So I went into the house and that’s how it looked it 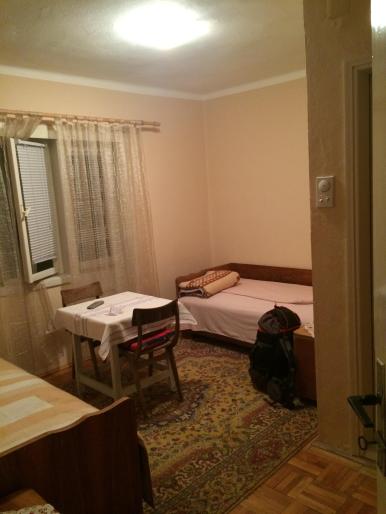 Now I was hungry, and decided to go to nearby restaurant that I saw on the way. Went there, asked for menu and asked waiter for recommendation. He suggested Mućkalica which is like roasted pork, but I didn’t felt like eating pork so I said replace pork with lamb. For beer he suggested Jelen and for starters I went for Moravska salad. Here is how it looked. 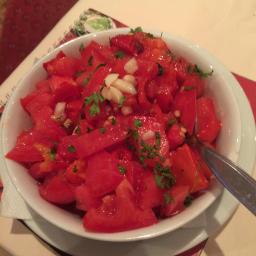 Food was tasty but beer, either I was thirsty or it was really awesome. I loved it. It was like my tongue was absorbing the taste. While I was eating, a guy next to me was sitting and he asked me where I came from since I was speaking in English. I asked him to join me which he did. He was in middle 30’s quality assurance engineer in some Korean company. We had interesting discussion about religion, politics and languages. After eating, I said good-bye to him, paid the bill and went back to apartment. After sometime, my host Biljana and her husband came back from their job and I decide to visit them downstairs.

They were very friendly people and I told them about my plan for tomorrow and they offered my to drive to start of hiking trail of Suva Planina. They also were surprised that I was doing the hiking on my own. After small talk, I went upstairs and decided to sleep. Today’s been a stressful but fun day.