So last evening, I booked a tour with “Travel Nice” for Golden Circle of Iceland. A bit of information about Golden circle, it is a popular tourist route in South Iceland, covering about 300 kilometres looping from Reykjavík into central Iceland and back. It is the area that contains most tours and travel-related activities in Iceland.

The five primary stops on the route are the Þingvellir national park, the Gullfoss waterfall (meaning “golden falls”), and the geothermal active valley of Haukadalur, which contains the geysers Geysir and Strokkur.

The tour was supposed to start at 9:30 so I went downstairs, grabbed coffee and croissant and went out to nearby supermarket to pick some stuff for journey. Around 9:30 van picked me. It was a sunny day in Iceland. Not a single cloud and thankfully, it was a small group. The guide was Italian living in Iceland for a couple of years. There was a Polish couple, two Irish girls and couple from Boston and as usual me the solo traveler :).

Once we exit the Reykjavík, I started to see such a versatile landscape. Unfortunately, I still felt bad from past events so I didn’t took many pictures and tried to find comfort just by looking at the nature around me silently.

After about 45 minutes, we made our first stop at Þingvellir which is a place in southwestern Iceland, near the Reykjanes peninsula and the Hengill volcanic area. Þingvellir is a site of historical, cultural, and geological importance and is one of the most popular tourist destinations in Iceland. It lies in a rift valley that marks the crest of the Mid-Atlantic Ridge. It is at the northern end of Þingvallavatn, the largest natural lake in Iceland. Alþingi (“Althing” in English), the Icelandic Parliament, was established at Þingvellir in 930, and remained there until 1798. Þingvellir National Park (or Thingvellir National Park) was founded in 1930, marking the 1,000th anniversary of the Althing. It was later expanded to protect natural phenomena in the surrounding area, and became a World Heritage Site in 2004.

After parking the van, we took a small walk from the valley to a nearby small waterfall. The views on the way were brilliant

Guide told us about the history of the place but I was too occupied by nature around me to hear. Usually, I would try to socialize with people but since everyone was a couple, it was kinda useless to interrupt them. So I walked behind the group silently. We reached the waterfall finally. It was small but beautiful 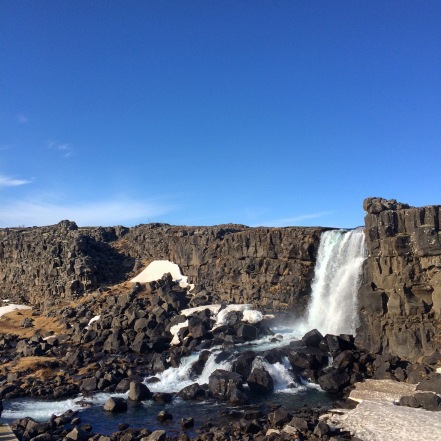 I was at a place, where I couldn’t see people down there neither they could see me, after sometime I decided to check on the group and it turned out they left. I decided to go down and followed the same trail and found them at parking. From there, we started the journey to second stop that would be Gullfoss. Gullfoss meaning Golden Falls is a waterfall located in the canyon of the Hvítá river in southwest Iceland. Gullfoss is one of the most popular tourist attractions in Iceland. The wide Hvítá rushes southward, and about a kilometre above the falls it turns sharply to the right and flows down into a wide curved three-step “staircase” and then abruptly plunges in two stages (11 m and 21 m) into a crevice 32 m (105 ft) deep.

It was really windy and crowded over there. Again, I went away from group and started exploring on my own. I tried to take a couple of pictures but I couldn’t get a better shot because of all the people with their selfie sticks. 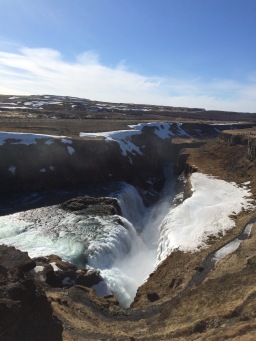 From there, we went to third stop which is famous geyser, erupting every several minutes & shooting water up to 70 m into the air. Guide suggested that we can also grab lunch at one of the cafe nearby. We had two hours to explore and have lunch. I again, set out on my own.

There were many people around Geyser with their cameras ready to take pictures of themselves when Geyser erupts. I decided not stay there and climb the nearby hill and take pictures from there. A few pics I took on the way 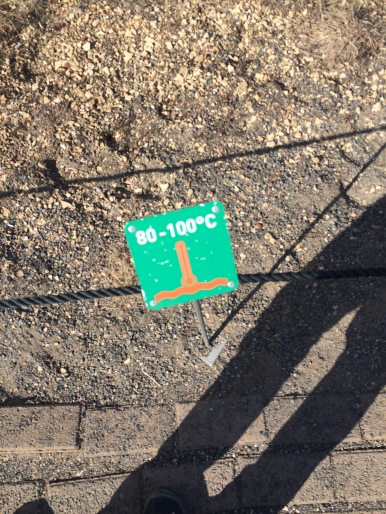 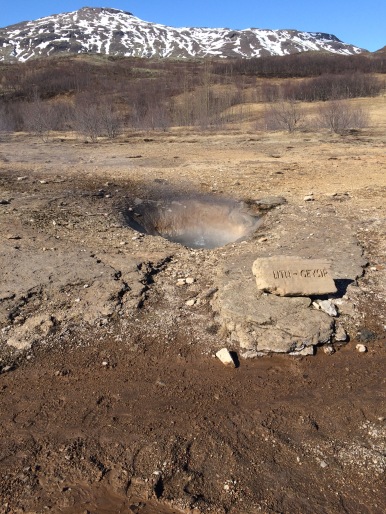 After 15-20 minutes of easy hike, I was on top of hill and view from there was awesome. From time to time, a few people will pass through but it was mostly peace. Some pictures I took from there

Waiting for Geyser to Erupt

There was a mountain on backside and river down there that made an amazing view, I sat there silently and watched the view as I missed someone deeply. 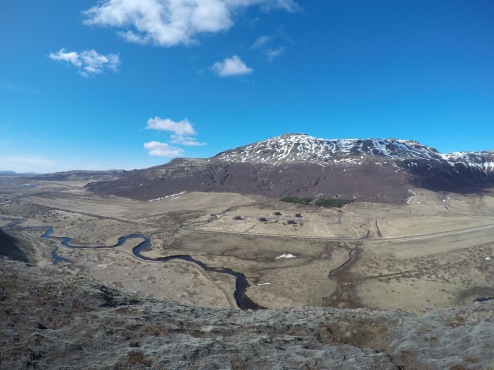 After spending sometime there, I decided to go down and grab lunch. I went to cafe and got the cheese burger and fries. Nothing extra ordinary to talk about. Later went outside, we still had 40 minutes to kill, so I decided to climb another small hill. Went there, sat and enjoyed this view

The reason I chose Fine Travel for this tour over other companies is because they had one more spot included as part of this tour. It’s called Kerið which is a volcanic crater lake located in the Grímsnes area in south Iceland. It is one of several crater lakes in the area, known as Iceland’s Western Volcanic Zone. We drove there and after sometime, we reached the lake. It was awesome, we walked around the lake and I took several pictures from different angles. 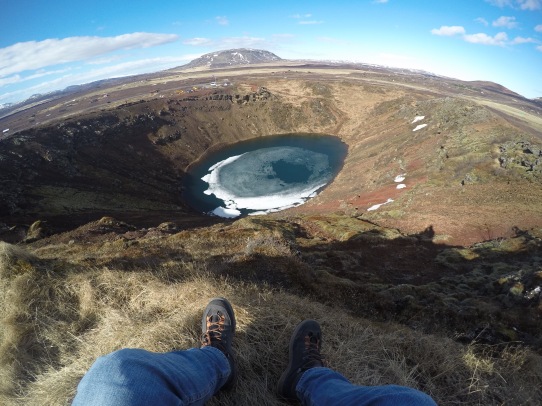 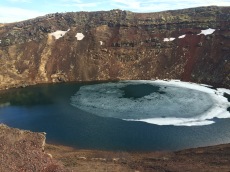 After spending sometime there, we decided to get back into Van and thus the journey to Reykjavík started. Around 4, I was at my hostel. I was planning to take a nap but I met Emily, the Canadian girl from my room and we started to chat. Then we decided to take a walk to the place that I discovered. We took a walk and talked about culture, food and how my culture revolves around food. We also talked about stereotypes and how I am 100% randomly selected at airports for extra checking.

We spent quite sometime walking and by the time we got back hostel, I was super hungry. I decided to go to eat something and Emily suggested Noodle station, a place near our hostel with relatively cheap and nice Asian noodles. Jane, another girl from hostel I met last night in kitchen decided to walk with me to the place. I got the noodles and came back to hostel’s kitchen.

There we made plan to rent a car tomorrow and go to places. I finished the soup and went back in dorm. We had new friends there now as our Chinese friends left this morning. Gustova from Johannesburg and Charlotte from US. I told them that today I am going for Northern light tour and they should also as weather is really nice and clear. Then I started talking to Charlotte, she was 18 years old solo traveler and we talked about politics and Donald Trump :).

Then I took my bag again and set out to my hunt for Northern light hunt. Bus picked me at 9 and we started the journey. I slept in bus and woke up when we reached at the place. They drove us again to somewhere in Þingvellir National Park. It was dark enough, but from time to time, there would cars and buses passing causing light pollution. Beside that, there 100s of people around trying to take pictures with their cellphones and cameras with Flash on. I got really pissed off and decided to take a walk further down.  I asked the bus driver what time we plan to return and he told me time. He asked me not to go anywhere but I said I’ll be back here by the time you go back. He said, if I don’t come back, they’ll leave me. I said sure, what’s better than getting lost in place full of stars, right?

I started walking in random direction and came across a place where there was no one around and it was dark completely. I looked up at the sky and I can’t describe what I saw. The number of stars, I haven’t seen so many stars even at Tenerife because it was a full moon night. Tonight, moon has set already so it was completely dark. Picture of the place where I was standing to take pics

And that was a lucky night as lights were right in front of me, I setup my camera and took several pictures, some of which are following. 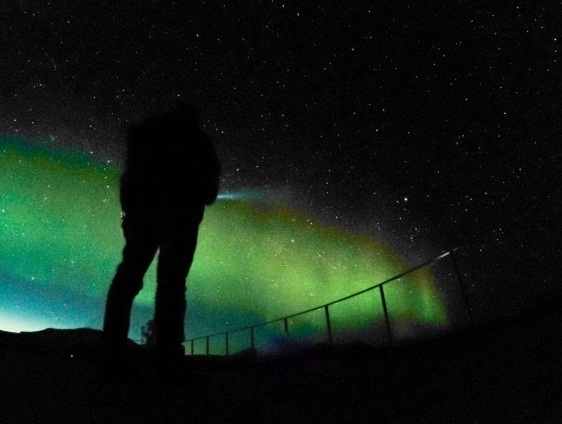 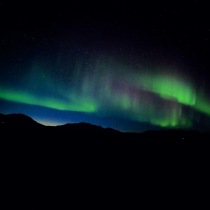 Lights were there for longer than I saw in Norway/Finland but they were not dancing as much. Still, no complains. I stood there in complete darkness where I couldn’t see my hands and I could hear myself breath. I asked myself, why am I not afraid? Then I laid on my back in that absolute darkness and gazed at stars.

After sometime, it got really cold so I decided to return to humans :). I went into bus and after sometime, bus started and an hour later, bus dropped me at the hostel. I met Gustavo in hostel lobby and he offered me beer. We had beers and Pringles and talked about things. I show him my pictures of Aurora and he was impressed :).

It was around 3 or 4 I decided to go back to my room, tonight I managed to sleep for a couple of hours as I just came back from a place where I had a sense of belonging. Before sleeping, I thought, someday, I’ll sell everything and buy a van and drive around in mountains. I will walk up to sunrise every morning and will see sunset every evening. I will sleep there under thousands of stars and that way, I’ll never be alone at night and yet there will be no one to break my heart.